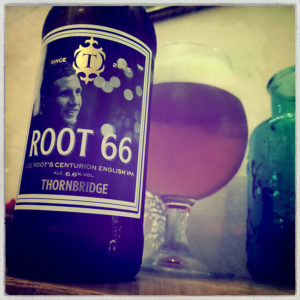 Not only was this beer brewed to celebrate Joe Root’s double century against India – He wears the number 66 for England’s Cricket Team – but all the profits from the sales of this beer go to Joe’s Children’s Hospital Charity.
All of this is very noble, supporting one of our national sporting heroes in their charitable endeavours, but as importantly, this is a damned good English IPA.
It’s a beer that you can really enjoy in the knowledge that your money is going to something worthwhile.
The beer pours a bright gold and smells of elder and strawberries, while its malts are soft caramel drenched wafer biscuits, runny honey and digestive biscuits.
The hopping brings dewy hedgerow greenery, a lick of liquorice root, a slap of lemon zest, nettle stings and spicy garden herbs, all of which make for a crisp clean beer with a long dry and very satisfying finish.
Excellent.