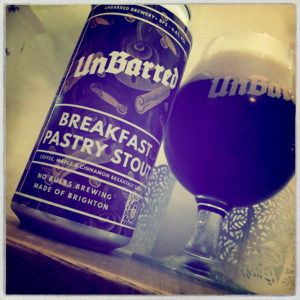 As with pretty much every beer that UnBarred brew, this one is made greater than the sum of its parts by the balance it gives to all its ingredients.
Brewed with coffee, cinnamon, vanilla and maple syrup, you might expect a great big freight train of overwhelming flavours.
But that’s not what happens here.
Instead everything sits comfortably and sexily next to each other, works together to create a fabulous (and I don’t use that word lightly) drink.
The deep mahogany brown beer and its frothy cappuccino head sit invitingly in my glass with the aroma of coffee doused pecan pie drifting up to me.
The body of the beer is thick with buttery flaky pastry filled with vanilla custard, deep dark coffee and drowned in maple syrup.
At the edges there’s a much needed slap of herbal hoppy greenery, fresh and pithy, it adds a dry brittle bitterness that stops the beer becoming overly sweet and sickly.
And in the finish the beer is big and round and chewy, and truth be told, super sexy.