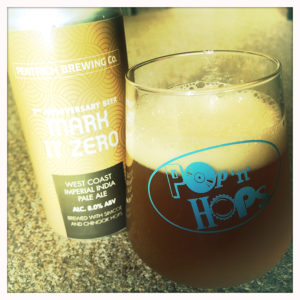 This Imperial West Coast IPA is another in Pentrich’s Anniversary range and sadly doesn’t reach the standard that I’ve come to expect from the brewery.
The beer pours really flat with a thin gassy head and a smell heavy with Diacetyl.
The malting is slick rather than smooth, unpleasantly buttery, its toffee and biscuits feeling like they’ve submerged in oil.
As a result the hopping – Simcoe and Chinook – don’t have a big enough body to balance them and so they become overly bitter and one dimensional.
Yes there’s some rolling tobacco and pine wood resin, but it’s almost acrid in its bitterness.
Not even the rum hit of booze helps.
Maybe that’s why it’s called Mark It Zero.
I poured this one away.