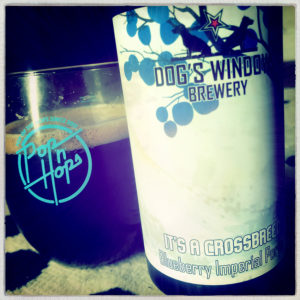 This is the second iteration of Dog’s Window’s Crossbreed series, and this time it’s an Imperial Porter brewed with blueberries.
And just like the Maple version I write about before, this beer is an absolute joy.
The thing I love the most about this beer is that Dog’s Window have allowed the blueberries to be themselves, they’ve not forced anything from them.
As you know, blueberries have a unique but really rather subtle flavour and instead of trying to push that flavour and amplify it, this beer lets the blueberries just, well, be.
All the things of a good Porter are here, with dry cocoa, honey, burned toast and digestive biscuits creating a solid body, and the East Kent Golding hops bringing some very English liquorice, marmalade and nettle sting greenery.
Vanilla has been added as well, but just like the blueberries, it’s a subtle addition, adding a gentle warm creamy sweetness while the blueberries bring their soft fruity bodies to the delightfully juicy finish.