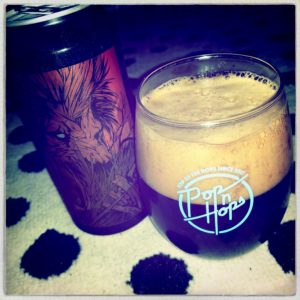 Oh my.
Greece’s Seven Island’s Fovos is a ridiculously good Imperial Stout that has been brewed with coffee, vanilla and maple syrup, and I mean lashings of coffee, vanilla and maple syrup.
This is a big, voluptuous and very sexy beer, a sensuous dive into the deep dark depths of what Imperial Stout can be.
The beer stinks of honeycomb and orange blossom, and pours a deep and viscous purple brown with a wispy cappuccino head.
The malts here go on forever, sticky and chewy, and packed with treacle tart and Crunchie bars, burned brown bread and the slaty lick of Marmite, while the hops manage to bring the slightest aside of fresh greenery to the beer’s edges.
And then the richness of the Tahitian vanilla and Canadian Maple Syrup go to work, at once creamy and viscous, but with that certain indescribable, not like anything else in the world feel that Maple syrup has makes for a finish that has you at once drunk while feeling like you’ve just eaten the loveliest dessert of your life.