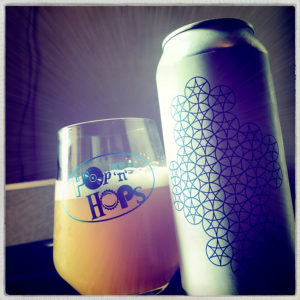 I’m rather enjoying this IPA, though unless I was told that it had been brewed with wild nectar yeast I’d never have guessed.
Maybe it’s the use of Verdant’s yeast strain as well, it’s big and slightly earthy peach stone and apricot is so bold, so up front (excuse me for that), that whatever the Metschnikowia Reukaufii yeast strain is supposed to impart has been bullied away into insignificance.
The thing is, there is a light honey sweetness here, alongside the malting’s biscuits, caramel and brioche, but it’s no more than you would expect from a beer of this type.
The hopping – Citra, Mosaic and Strata – bring lots of lemon curd, lime leaves, peach and mango, green herbs and gooseberries, making the beer feel super fresh, bitter and crisp, and this is made bigger by the clean gin heat of the alcohol.
So as I say, this is a very nice IPA, but it’s not really much different considering what could have been a really interesting addition.