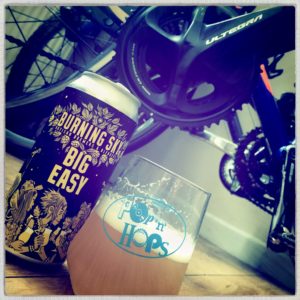 This, Burning Sky’s amped up version of their flagship IPA is really rather good. For a start it’s frighteningly drinkable.
The great big ABV adds a warmth and a depth but cleverly and dangerously it does this without making the beer feel boozy. The malting is big and round and chewy with caramel and Belgian waffles, while the hops bring washes of resinous pine, orange marmalade, lemon zest, rolling tobacco and green herbal leaves. The beer smells zingy and fresh, all grapefruit skins and honeysuckle. I’m downing it far too quickly for its size though, just because it is super refreshing with its long tingling bitter finish.