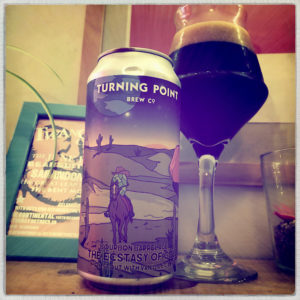 I’m openly a fanboy of Turning Point, but don’t let that make you think that this review is in aby way biased.
Ecstasy Of Gold is Turning Point’s Vanilla and Cacao Imperial Stout, a beer of hefty goodness, a beer heaped with burned toast and dark chocolate, treacle tart and warm pastry malts, a beer that has rich round and creamy vanilla and a chewy cacao heart.
It’s a beer that feels boozy in the sexiest of ways, its alcohol heat warming your chest.
What Cameron and the gang have decided to do is leave a load of it in Bourbon barrels for ten months to see what might happen.
And what has happened is that this great big beautiful beer has taken on fathoms of damp woody goodness, rain soaked oak and a hint of mushrooms, along with a deep rum body and the most gloriously drunken smell of brandy and plums.
What Ecstasy Of Gold has become by hanging out in a barrel for the best part of a year, is a beer that you’ll not want to end, a beer you’ll want to take your time over, to explore as you head for the inevitable oblivion of four hundred and forty millilitres of ten percent goodness.