Horsforth Brewery Revolt Against An Age Of Plenty (6%) 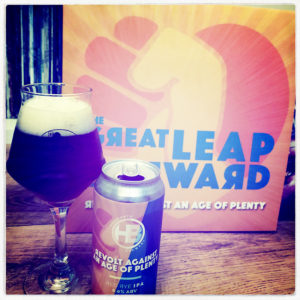 I’ll do my best not to be overly biased as I write about this super beer.
Brewed to celebrate the release of the new LP by The Great Leap Forward, this beer was made by Horsforth in collaboration with super home brewer Ian Brewchap and Alan Brown, the man who is The Great Leap Forward.
Why would I be biased?
I play bass in the live version of The Great Leap Forward, and Ian and I designed the sleeve for this new album, while Ian also designed the labels for this beer.
So, let’s try and just talk about the beer.
This is a Red Rye IPA brewed with orange peel.
It pours a deep marmalade orange and smells of satsumas and peaches.
The malting, heavy with caramel and honey, is steeped in the earthy pumpernickel of Rye – which as my regular readers will know, is something that I love.
The hopping brings sharp green herbal leaves, rolling tobacco and marmalade, with the orange peel adding an extra zingy zip of pithy zest to the long dry finish.
It’s a big bold celebration of a beer, just as it should be.