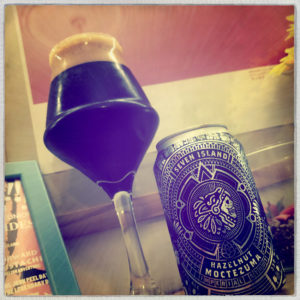 Some sixteen years ago I was offered a job in Tallinn, Estonia.
I really wanted the job, but I’d just discovered that I was going to be a father and so I turned it down to do the right thing.
This was, of course, before the age of modern beer and I was still a red wine drinker, whereas if the same offer was to be given to me now, I’d not hesitate for a second.
Firstly it’s because Tallinn is an incredibly beautiful city packed with art and life and excitement, and secondly because if the rest of Estonia’s beer is half as good as this I would be a happily drunk man for the rest of my days.
But this is where the story gets all confusing.
You see, everywhere you look this beer is described as being made by Seven Island of Greece, which as you know is some way away from the Baltic climes of Tallinn.
But according to the small print on the can this beer was actually made by Sori Brewing who are an Estonian brewery.
Whoever wants to claim this as their own (and my money is on SorI), Hazelnut Moctuzema is an absolutely massive Imperial Stout brewed with hazelnuts.
It’s thick and rich and gloopy, stuffed full of rich black coffee, burned brown bread toast, treacle tart and vanilla ice cream.
But it’s the mixture of pink fluffy marshmallows, Neapolitan ice cream and intensely woody roasted hazelnuts that grab your attention and your palate.
In the finish the booze gets hot and steamy, making everything feel drunkenly hazy in the most delightful way.
I may have to call my old friend Jan and ask him if he can reopen his offer of employment, because I want to live in Tallinn and drink this beer all the time, even if it is Greek.