Posted on September 5, 2021 by Simon Williams

Yes, I know that CAMRGB is a all about beer and yes, I know that many of our readers are vegetarians and vegans, but recently I’ve been eating sausages.
Big fat meaty sausages made with responsibly sourced open barn reared pork and flavoured with lashings of booze, there are a few different varieties to choose from.
The Tequila Slammer Banger was rich with chilli and zingy with lime, while the pork shoulder used in the sausages was round and meaty, and not overly ground, making for a lovely bite and texture.
I enjoyed them on an open sandwich with a classic high street Lager in Warsteiner, and had a rather lovely lunch as a result. 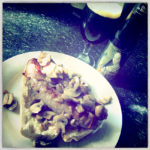 The same evening I decided to try the Swanky Prosecco & Apple Banger, paring them with garlic mushrooms and a bottle of Duchesse De Bourgogne.
The apple was the star here, soft and sweet and fruity, and the meat was offset well by the earthiness of the mushrooms and that delicious Duchesse fruity sourness.
Finally, and you’ll be pleased to know, not on the same day, I had the Bloody Mary Bangers. 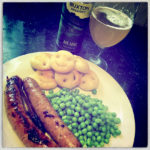 The Vodka managed to remain after cooking, adding a clean booziness, while tomato, horseradish and lemon gave the sausage a zesty kick.
I decided to go totally classy with this meal and paired the sausages with peas and Smily Faces, along with Buxton’s Axe Edge.
Definitely worth a try if you like your sausages big, meaty and in your face.