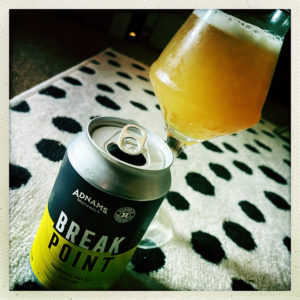 Break Point (4.8%)
Brewed in collaboration with Harbour, this Farmhouse Pale suffers from needing a bigger alcohol hit.
There’s some lovely things going on in here, the Kveik yeast bringing peaches and apricots, and a little dusty mushroom fug, while the malting adds sticky caramel and lots of broken biscuits.
And the broken biscuits are very particular to me.
There was someone at I was at school with who always seemed to have a bag of broken biscuits to share.
I’ve no idea where they got them, but they had a particular biscuity flavour – the combination of all sorts of different types mixed together – and that’s what’s in here.
The hopping gives you nettles and green tea, lemon zest and lime juice.
But for all this good stuff the beer fades very quickly, and feels like it needs a bit of weight behind it.
Break Point is a decent little beer, but brewed to six percent would be an absolute cracker. 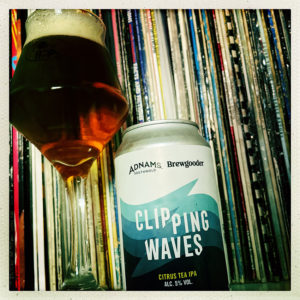 Clipping Waves (5%)
It’s the Darjeeling tea that makes this little IPA so very good to drink.
Beautifully balanced and brewed in collaboration with Brewgooder – the beer brewing charity that is trying to provide clean water to millions – Clipping Waves feels like an Adnams beer.
The malting is solid, all caramel and runny honey, waffles and wafers and brown bread crusts, while the hops – Olicana and Sabro – slap you with mango and coconut, green herbal foliage and lemon curd.
But it’s the tea that comes to the fore in the finish, making the beer super dry with tannins, and lightly spiced and warm.
I’d be happy to drink this every day. 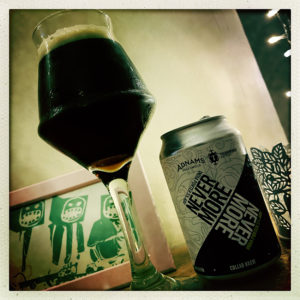 Never More (5%)
This collaboration with Thornbridge is an India Porter, a hybrid of Ghost Ship and Wild Raven.
It pours a deep conker red and smells of roast chestnuts and chocolate.
The malting is dry dark chocolate and black coffee, burned brown bread toast and sticky honey, while the hops bring pineapple and garden herbs, orange blossom and rolling tobacco.
The lightness of this beer surprised me and initially I was underwhelmed by it, but as I continued I rather liked the soft subtleness of this brew.