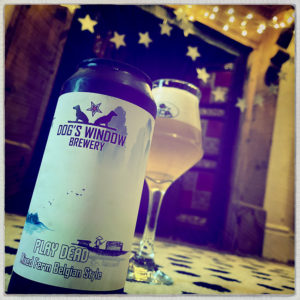 Well now, it would appear that Dog’s Window can currently do no wrong.
Take this mixed fermentation Belgian Triple as an example.
It’s a beer that could go a number of ways, scorching alcohol, yeasty badness, but Play Dead is superbly balanced.
It pours a bright gold with a little fluffy head and smells of brioche and honey.
In fact it smells Belgian.
The malting is soft and creamy, with toffee and honeycomb, baguette crusts, waffles and lightly salted doughnuts, while the yeast adds a peppery earthy warmth, all peach stones and distant farmyards.
The hops cut across with steely green herbs, nettle stings and a smack of lemon zest, adding a little bitterness to the long and boozy, white rum of the finish.
Superb brewing.