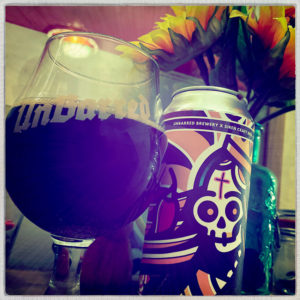 I’m about to lay into this beer and so before I do let me remind you how much I love Unbarred and the beer that they make.
That said, every brewery has an off day and for me, this beer is Unbarred’s off day.
Brewed in collaboration with Siren, this beer promises loads and delivers very little.
The aroma is a watery chocolate and toffee and, taking a swig, the burn of alcohol overrides all the other things that the beer’s label tempts you with.
The Mulato and Poblano chillies only hint at the fruity heat that you’d expect, while the vanilla, almond and cinnamon are simply not big enough to give you anything more than an apology for their lack in what is, on the shelf, a rather expensive can of beer.
To top it all off the beer feels rather thin and a little bit oily, and is nowhere near the, “comforting and balanced hot chocolate in beer form,” that the label promises.