Well now, here’s a thing.
Not only have Signature brewed their 2021 version of their Imperial Stout, but it turns out they’ve also stuck a load of their 2020 version in Tennessee Bourbon barrels and left it to soak in the good stuff from its wooden bedroom.
Here’s what we have as a result: 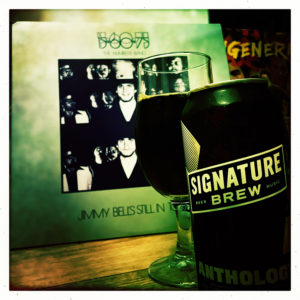 Anthology 2021 (9%)
This year’s version of Anthology, Signature’s Imperial Stout is a great big drunken hug of a beer.
I decided to enjoy it with one of my very favourite LPs, to sink into the music and the beer and wallow in the sounds and the flavours.
Rum and raisin chocolate aromas drift up as I take my first swig where I’m met by deep dark chocolate, vanilla pods, lashings of coffee and freshly baked treacle tart.
This is a beer with a pastry rich, dessert of a body.
There’s a little red leaf litter pithy dryness from the hops that add a prickle of sharpness to the edges of the beer, but with the push of the boozy warmth, this is a drink all about its round rich malting.
Now if you’ll excuse me I have a record to listen to. 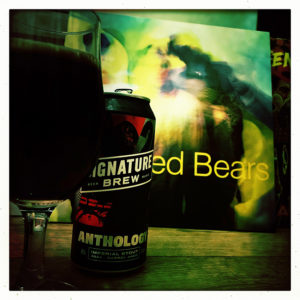 Anthology 2020 Barrel Aged Imperial Stout (11%)
Take an already brilliantly made Imperial Stout packed with liquorice and treacle tart, deep dark coffee, tobacco leaves, burned toast and rich dry bitter chocolate, a beer that’s already bristling its boozy muscles, a beer that’s wearing a rather snazzy waistcoat of hoppy orange and red autumnal leaf litter crunch, marmalade stickiness and pithy herbal leaves, and wrap it in a dark and damp woodiness that’s heavy with brandy and bourbon, prunes, plums and a hint of woodland mushroom and you’ve got a sensational beer and a review that has managed to be written in one breathless sentence, which is kind of like listening to the LP I’ve pictured this beer with.