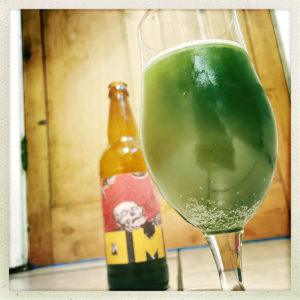 Once a year Ian Brewchap allows me to come up with a silly beer idea which he then creates.
This year I decided to challenge him to make a gooseberry, nutmeg and spinach Saison.
And I have to say it’s a triumph.
Ian “dry spinached” the beer because, I think, he found it amusing to have that on the label instead of dry hopping.
Let’s start at the beginning.
The beer pours a delicious green with a lime green foamy head and smells of fruits and farmyards.
The gooseberries are fresh and pithy, bright and sharp, but not allowed to feel bitter or tart as the DuPont yeast combines with the nutmeg to create a warm, earthy and lightly spiced backbone that underpins the sweet caramel and bread of the malts.
There’s a crisp metallic bite undercutting the sharp bitter finish that I’m putting down to the spinach.
This is a beautifully made beer than on paper may not have worked.