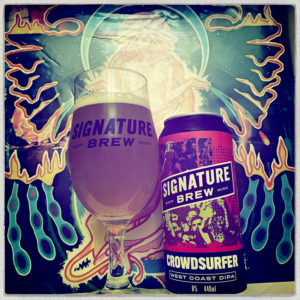 Crowdsurfer is a West Coast DIPA, and I for one thank it for being that.
It’s so refreshing to have a great big sexy Double IPA that isn’t laden with dirty cloudy yeast, that same old same old NEIPA thing going on.
Instead this is an IPA that is crisp and clean, its hops sharp and stinging with nettle hedgerow greenery, the fizz of sherbet and the tang of lemons and grapefruit alongside a dry pithy orange rind bite.
The malting is warm caramel toffee, runny honey and crumbly golden oat biscuits, while I’m the finish there’s a white rum boozy kick that amplifies just how fresh and lovely this beer is.