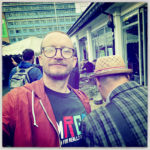 And here we are on the evening of Fathers’ Day.
I’ve just treated myself and my son to a bit of steak and I’m drinking a rather fantastic barrel aged Stout gifted to me by Turning Point Brewery and thinking over my day at Sneinton Market.
You see, yesterday at the Nottingham Craft Beer Festival was, in a word, fab.
The rain might have been raining and my hair might have been ruined, but the company was good and the venue is as lovely as I remember it. 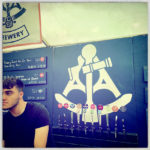 Laid out in the Market’s lanes, there were two groups of bars and one of food – and let me just mention here that the falafel that Chris (@titwillars) treated me to were delicious.
We started our drinking tour at Turning Point because I wanted to catch up with Cameron as I’d not seen him in ages.
started with a Disco King, one of the brewery’s standards and always good and fresh, then tried a new Double IPA before we moved on. 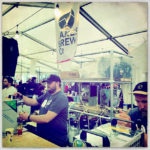 There were a lot of breweries on offer and we were never going to get around them all, so were wandered around randomly picking places to drop in on.
Of all the bars we tried, Navigation stood out for their very good American IPA and warm welcome, Amity provided us with some beautifully made Pale Ale, and Firerock Brewing offered a very good Imperial Stout.
But my personal highlight was Lakes Brewing and seeing Alex, who I first met many years ago when he was at Hardknott and I had just started writing about beer.
Lakes’ DDH IPA was big and round and fruity, while their Cold IPA (I have no idea what that means exactly, and didn’t bother asking) was stingingly dry and pithy with loads of lovely grassy flavours. 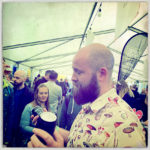 Our final stop was back to Turning Point where they were presenting a free tasting of two of their Imperial Stouts, which leads me right back to this can I have in front of me.
Barrel aged and boozy, this Salted Caramel Glazed Doughnut Stout (10%) was the beer of the day for me, and so I am going to sit here quietly and finish it, and perhaps later I will dream about next year’s Nottingham Craft Beer Festival, it’s buzz and atmosphere, and all the lovely beery delights that I might discover then.
You really ought to go.