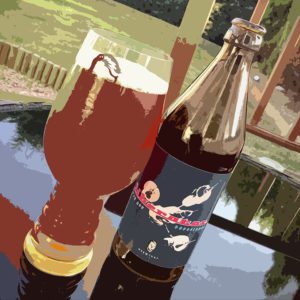 And so my Guru of home brewing that is Brewchap grabs his old mate Andrew of Revolutions Brewing and whips up a Doppelbock.
And not just any old Doppelbock neither.
This here beer is big and round and chewy, just as a Doppelbock should be.
Honey and rum and raisin chocolate, digestive biscuits and Toffifee make up the malt body, with a lightly spicy hedgerow hop hit cutting through all this gloop, providing a bright sharp aside, while the booze builds leaving you with a very moresome brandy snap finish.