Posted on September 4, 2022 by Simon Williams 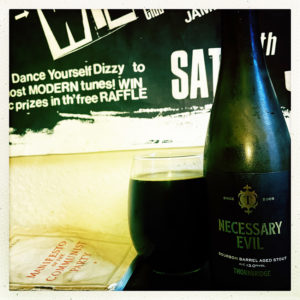 This Bourbon Barrel Aged Stout won a gold award at this year’s World Beer Awards, and for good reason, even if for logistical reasons I was unable to take part in the judging.
You see, even without my amazing tastebuds, the other judges managed to award a prize to a beer that deserved it.
It can only be by luck rather than judgement.
Necessary Evil is big and round and chewy.
Acres of sticky treacle tart, black cherries, honey smothered toast and pecan pie make up the body, while dark chocolate and brandy snaps mix with a hint of crunchy red leaf litter from the hops.
A soft and dank oak floorboard woodiness raises its head as you drink, at once earthy and fresh, it tastes like a walk around a stately home smells, rich, veneered and deliciously out of reach to a mere mortal.
The finish is heavy with peat whisky and tamarind, dry and chest warming, I felt the need to read Marx and listen to The Ex if only to stop this amazing boozy wonderland from turning me bourgeoise.