It’s not too that things make you feel cool and hip, and at my age I’ll take whatever I can get.
And so when my youngest daughter told me that Lovejoy, a band she liked had played at the UnBarred Brewery and said, “aren’t they friends of yours?” I dug out an old UnBarred sticker I had in a drawer and felt like the super cool father for about two minutes.

I’ve watched UnBarred grow and mature into a seriously good brewery and I’m always eager to see what they are up to.
They’ve made some impressively BIG and cleverly flavoured beer in the past and so, with this latest bunch, it was nice to see them brew some more “straightforward” styles amongst the beautiful monsters, because therein often lies the proof of a good brewer.

And so with no further ado, here we go. 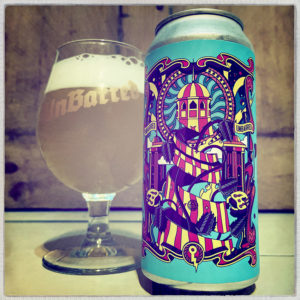 Skelter (5.5%)
Cold IPA, it’s the new thing.
Brew an IPA and ferment it slowly with a Lager yeast.
I actually like the beer I’ve tried in this style, and this one is especially good.
The slow fermentation makes for a super soft and creamy toffee, honey and malted milk biscuit body.
It’s warm and chewy while remaining light, and over it the hops – Citra, Idaho 7 and Simcoe in this version – are big and bold and bright.
Lots of melon flesh and lemon rind, sticky pine resin, coconut water, lime leaves and sherbet fountains, all of which leads you to a deliciously dry bitter finish. 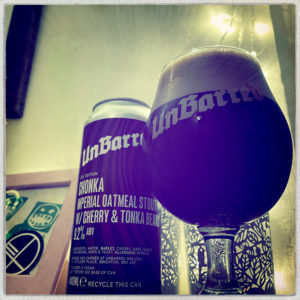 Chonka (9.2%) is an Imperial Oatmeal Stout brewed with cherries and Tonka beans, and it is every bit as brilliant as I’d expect a big beer from UnBarred to be.
You see, this Brighton based brewery headed by the lovely chap that is Jordan, don’t half know how to make a big beer.
And so Chonka has a massive smooth and creamy, white chocolate, Milky Way, honeycomb and biscuit malt body, a cappuccino coffee warmth topped with dark chocolate sprinkles and dedicated coconut, over which a deep and very sexy black cherry jam appears, adding a round fruity bitter sweetness to the beer before everything explodes in a dark rum and raisin boozy finish.
My word, UnBarred know how to create big things. 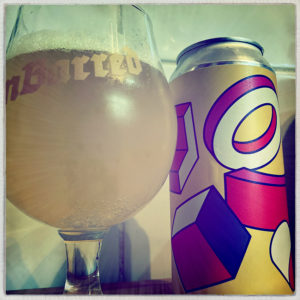 Table Beer (2.8%) is super clever.
Light as a feather alcohol wise, but packing not only a big hop punch, it also has a round chewy body that stops it, like so many other low alcohol beers, from feeing thin and flighty.
You find a runny honey, baguette crust and salty caramel malt thing going on right through this beer while the Citra and Columbus hops bring rushes of zesty grapefruit, lemonade, lime leaves and a slap of resinous redwood sap.
Terrific brewing. 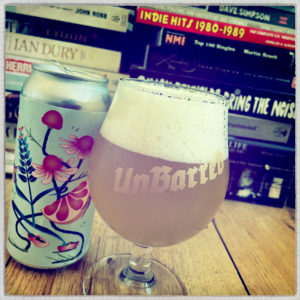 Botanical Wit (5.2%) has been brewed in collaboration with Madame Jennifer Distillers, who have provided botanicals in the form of chamomile flowers, coriander and grains of paradise, all of which have been used alongside fresh and dried oranges and grapefruit.
The result is a round and chewy, creamy beer with a soft bread dough, rich sticky honey and toffee biscuit malt body, a lightly floral and zesty aroma and a finish that zaps you between the eyes with big fresh and bold flavours.
Fruits and spices, lots of pithy citrus and the woody warmth of coconut make up the moreish finish. 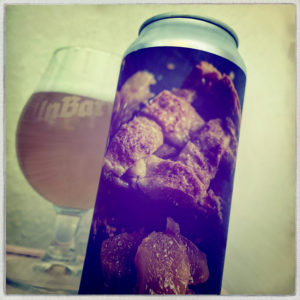 Apple Pie Pastry Sour (7.3%)
Baked apples sprinkled with cinnamon and nutmeg, flaky pastry and a warm custard, this could be the shortest review I ever write.
You see, this beer tastes exactly like my first sentence.
The apples feel gooey and unctuous, there’s the woody nutmeg and cinnamon kick, a malt body that, along with the yeast, recreates that buttery shortcrust pastry feel, and it is all wrapped up in a smooth vanilla finish.
This is very clever and absolutely delicious brewing. 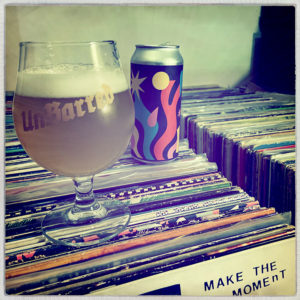 Little Hazy (4.4%) is another brilliant beer from UnBarred.
With this one the brewery really shows its class, laying everything out in the most beautifully balanced manner.
The malting is light yet solid, round and soft and chewy, with toffee, biscuits and honey creating a sweet base, while the yeast brings a layer of lightly salty peach jam to the party.
The hopping is sharp and bitter, fresh as a daisy with mown lawns and herbal greenery, apricots and lemon zest, mandarins and pine resin, which makes for a sherbet zing of a finish.